My husband is terrified of spiders.  I mean terrified.  In general, they don’t bother me.  I know they eat smaller bugs, and I am totally down with that.  When I see the occasional spider around the house, I will generally leave it be.  This annoys Abe.  Very much.

Yesterday, as I was walking past our bedroom window, I noticed something out of the corner of my eye.  A large something that caught my attention and made me decide to look closer.  I should note that what I saw was outside, not inside.  I probably would have wept with fear if it was inside.

No, it was safely out of doors, and so I gleefully grabbed my camera and captured this terrifying, interesting, cute? photo that I shall share with you now. 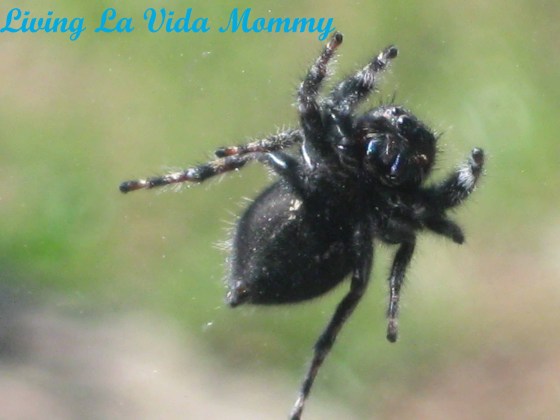 Oh, I hope you didn’t view that photo with a full bladder.  My apologies if you did.

Isn’t that picture amazing though?  You can see it’s eyes!  And it’s fangs!  I dare say he was posing for the camera.  He almost looks like he is saying, “Waaaaaaassssssuuuuupppp!”  That or, “I vant to suck your blood!”  Do spiders have Transylvanian accents?  Probably not.  But if he was saying “I vant to suck your blood,” I think he would say it in that accent because that would be funny.

This spider is so large, I think he deserves a name.  I don’t know if I will see him again, but the terror he generates should be reason enough to name him.  See, as soon as I uploaded these photos, I posted them on my husband’s Facebook Wall.  Not to scare him, I would never do that!  No, I wanted him to enjoy my photography skillz.  Okay, I can’t even type that with a straight face.  I did it to scare him.  I’m pretty sure it traumatized him a little bit.

Back to spider names….Hmmm…..Maybe something like Damien or Chucky?  You know, a classic scary movie name?  I would say Diablo, but that would too quickly take Abe’s mind off of the scary spider and back to his beloved gaming.

This is tricky.  For now, I shall call him Ese.  That is Spanish slang for friend, homey, bud, etc.  Are you imagining the spider with a Mexican accent now?  I am.  I think it makes him that much more lovable.

I leave you with the Spanish words to The Itsy Bitsy Spider.  Sing it all scary like in your head, for full effect.

5 thoughts on “Along came a spider”

Hello, my name is Angie and I am awesome. I married an awesome guy, we have awesome kids, and we enjoy awesome things.